For everyone who can’t get enough of the trio that investigates modern-day crimes with historical bases, more of Whitechapel is on the way. 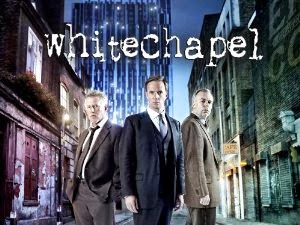 premieres on ITV next week.

The first two series revolved around murders reminiscent of those committed by Jack the Ripper in the late 19th Century and the Kray Twins in the 1950s and ’60s. The third series covered three storylines: crimes that echoed those of the Ratcliff Highway murders of 1811, the Thames torso murders of the 1880s, and the lost 1927 Lon Chaney silent film London After Midnight.

Now the team investigates a new series of bizarre and macabre murders, and delves into crimes related to witchcraft, cold war espionage, ghoulish Victorian surgeons, cryptozoology, and hidden horrors in the East End’s underground tunnels. And Buchan must use his treasure trove of archive material to find historical precedents.

In the first episode, Chandler and Miles are called to investigate the murder of a vagrant who was slowly crushed to death by stones. As more grisly crimes are committed, they realize that they must consider the possibility that these are the results of sinister acts that were rampant during the 16th century.

Check out the teaser.

in the U.S., but no announcement has yet been made regarding the fourth.

Whitechapel: Series 4 premieres on ITV in the UK on Wednesday, 4 September, at 9PM local time.