Idris Elba has been saying for a while that he’d like Luther to be on the big screen, so could it be that, post Series 3, we’ll be heading to the cinema to see more of this fan-favorite detective? 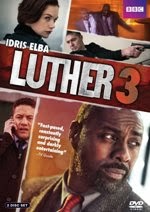 While doing publicity for his latest film Pacific Rim,

which opened this past weekend, Elba spoke with IGN about a Luther feature film and shared this:

“There’s a massive possibility ‘cos I’ve been talking to [series creator and writer] Neil [Cross] about it for the last year and, you know, I think we’re finally got into the place, right, where we’re going to move forward with it. Really excited about that.

“I see it being a movie, you know. It has the scope on film, on television it still has that, you know, cinematic feel to it, and I think, you know, I wouldn’t change much for the films, to be honest. It would just be on a bigger screen, and longer.”

Whoa. Hold on there, Nellie. Did he say “films,” as in the plural? He did, indeed. So the plot, as it were, thickens.

“Neil has an idea to use… to make it an origin story, and so we find out ‘Who is Luther?’ and where he comes from.”

That would be pretty cool. Not so much, though, for fans of Alice Morgan (Ruth Wilson), since she and Luther didn’t meet and begin their, um, interesting relationship until Series 1. But we could see a return, if you will, of Luther’s wife Zoe (Indira Varma), depending on how far back the origin story goes.

As far as series’ prequels go, a film version would be fantastic. Until then, Luther fans have Series 3. Viewers in the UK have already been treated to three of the four episodes, while those of us in the U.S. will have to wait until 3 September, when it debuts on BBC America at 10PM Eastern.

And if you’re a stateside Luther newbie, catch up on Series 1 and 2 at Amazon Instant Video,

Hey students, check out all of the new & improved Prime Student benefits!

All 4 seasons of the original 2011 British TV thriller Mad Dogs are now streaming in the US on IMDb TV.

Get 3 Months free of Audible Premium Plus + Amazon Music Unlimited!

Save big on cookware & bakeware at ebay’s home kitchen.

Find great deals on all kinds of stuff at Amazon US, Amazon UK, Amazon Canada