ITV announced today that acclaimed singer Alfie Boe will make a special appearance on an episode of Mr. Selfridge, which will air during the program’s second series in 2014. 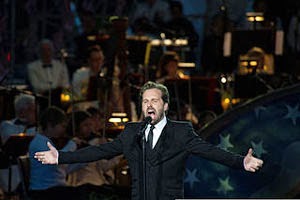 Anyone who’s seen Les Misérables in Concert: The 25th Anniversary

will undoubtedly remember Alfie Boe for his utterly brilliant performance as one of the artists who performed as Jean Valjean in the mega-hit musical. Soon we’ll have the pleasure of watching him perform on telly again.

opens in 1914, the 5th anniversary of the Selfridge’s department store. As the series progresses, the Great War begins raging in Western Europe, so Mrs. Selfridge (Frances O’Connor) and Mr. Crabb (Ron Cook) arrange a charity event at Selfridge’s to raise money for the troops.

Being the well-connected personage that she is, Lady Mae Loxley (Katherine Kelly) does some arranging of her own by asking old friend Richard Chapman (Boe), “a tenor who used to be top of the bill at the Gaiety” to sing at the event. And he obliges.

Said Boe of the role:

“I’m a huge fan of Mr Selfridge and am thrilled to have the opportunity to be a part of the series. I’m looking forward to seeing the set and meeting the cast.”

And according to Kate Lewis, Executive Producer for ITV Studios:

“As soon as we introduced the character of Richard Chapman, we knew Alfie Boe would be the perfect person to play him. We were delighted when he accepted the role and we’re looking forward to welcoming him on set.”

But wait, there’s more. According to ITV’s statement:

“Richard comes back into [Lady Mae’s] life at a time when she needs him most, offering her warm comfort and worldly wisdom.”

Could Richard Chapman be Lady Mae’s replacement, as it were, for Victor Colleano (Trystan Gravelle), even if it’s only for one episode for us? We shall see.

Mr Selfridge: Series Two began filming in April, and Boe will join Jeremy Piven and other cast members at the end of this month through the beginning of August to film scenes for his episode, which will air midway through the series.

(By the way, Boe is no stranger to British television dramas. His appearance in Mr. Selfridge

may be his first fictional role in one (he’s appeared as himself in many series), but he has also sung on the soundtrack

Premiere dates for the second series of Mr. Selfridge on ITV and PBS Masterpiece: Classic haven’t been announced yet, so stay tuned.