PBS is making sure we won’t have to wait too long for more shopping-centered drama post Mr. Selfridge, as it is bringing the hit BBC period piece, The Paradise, to Masterpiece: Classic this autumn. 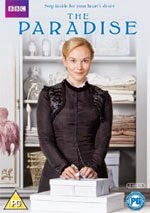 It isn’t retail therapy, but if you’ve been jonesin’ for drama set in and around a high-end department store, then The Paradise

will help cure what ails your Sunday evenings this fall. (Eight of them, anyway.)

and set in Northern England, The Paradise revolves around the lives of the people who work at, do business with, and compete with the first department store in Britain.

It stars Emun Elliott (Prometheus, Game of Thrones) as the devilishly handsome and haunted entrepreneur John Moray, who grew from being a drapers boy at the small Emersons shop to the owner of Emersons’ successor, The Paradise department store. A widower for three years, he seems incapable of experiencing happiness, despite the affections of Katherine Glendenning (Elaine Cassidy, The Others. Harper’s Island) the spoiled and desperately-in-love (or is it just desperate) daughter of Lord Glendenning (Patrick Malahide, Endeavour), the financial backer of The Paradise to whom Moray is indebted.

Enter Denise Lovett (Joanna Vanderham, The Runaway, Young James Herriot), a young woman from the town of Peebles who gets hired (and noticed) as a shop girl at The Paradise. Her working there is a big upset for her Uncle Edmund (Peter Wight, Babel), whose dressmaker shop is struggling to survive on the high street because of Moray and The Paradise, such that he is unable to employ Denise himself.

Edmund isn’t the only one put off by Denise’s working at The Paradise. Fellow shop girl Clara (Sonya Cassidy, Vera) sees Denise as a rival, not just for sales commissions but for Moray’s attention (and affection) as well. Miss Audrey (Sarah Lancashire, Coronation Street) also sees Denise, Moray’s “little champion,” as a threat, not to her love life (she was Edmund’s former flame) but to her career as the head of The Paradise’s ladies’ wear department.

By virtue of their similar settings, comparisons between The Paradise

are almost inevitable, but I will leave them to you to make after you’ve watched The Paradise yourself. Here’s the trailer for Series One.

(By the way, the BBC commissioned a second series, expected to debut in the UK in 2014, before the first one even finished airing, so high was the viewership for the first several episodes.)

The Paradise premieres on PBS on Sunday, 6 October, at 9PM Eastern. (Check your local listings.)