The BBC has confirmed a bevy of British TV stars for Death Comes to Pemberley, its adaptation of the bestselling P.D. James novel, itself an homage to Jane Austen. 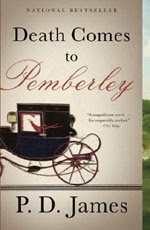 in which beloved characters from Austen’s Pride and Prejudice

are given James’ whodunit treatment. And the BBC is giving its miniseries major Brit TV star treatment.

Said Rhys of this role:

“Exciting as it is, one of the challenges of a part such as Darcy are the comparisons that will be drawn to those who’ve institutionalised him in the past. The beauty of ‘Pemberley’ is that it is an entirely new and different Darcy six years on. (And also, I don’t have to appear from a lake in a white shirt and breeches.)”

(That last comment refers to Colin Firth’s famous scene in the BBC’s Pride and Prejudice miniseries.)

“I’m thrilled to be involved in this adaptation of Death Comes to Pemberley. I have long been an admirer of Jane Austen and in particular of Pride and Prejudice. More exciting still is the chance to work with Matthew Rhys, who is not only one of the most talented actors of my generation but also the most fun!”

Portraying members of the Bennet and Darcy families are James Fleet (The Vicar of Dibley) and Rebecca Front (Inspector Lewis) as Mr. and Mrs. Bennett; Penelope Keith (To the Manor Born) as Lady Catherine de Bourgh; and Eleanor Tomlinson (The White Queen) as Georgiana Darcy.

Also joining the cast are: Trevor Eve (Waking the Dead) as Sir Selwyn Hardcastle; Joanna Scanlan (The Thick of It) as Mrs Reynolds; Tom Ward (Silent Witness) as Colonel Fitzwilliam; and James Norton (Cheerful Weather for the Wedding) as Mr Alveston.

Death Comes to Pemberley begins six years after the close of Pride and Prejudice. The happily married Elizabeth and Darcy are preparing for their annual ball when Lydia arrives unannounced and in a state, screaming that Wickham has been murdered. When Darcy leads a search party in the woodlands, they discover that the corpse isn’t that of Wickham, but of his traveling companion. Suspicions are aroused, a murder investigation ensues, and the plot thickens.

Filming begins later this month in Yorkshire. No word yet regarding air dates on BBC One for this three-parter or whether it will be shown stateside, so stay tuned.