Before Downton Abbey became the must-watch British period drama and Damian Lewis was nominated for a 2012 Emmy® (Outstanding Lead Actor in a Drama Series for Homeland), there was The Forsyte Saga. 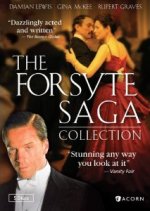 And tomorrow, the long-awaited release of The Forsyte Saga Collection arrives. The 5-DVD boxed set contains the complete unedited UK broadcast edition of Series 1 and 2, which includes more than 20 minutes of footage edited out of Series 1 when the miniseries first aired in the U.S. on PBS in 2003-2004. Bonus materials include a 20-minute “making of” featurette, photo galleries, cast biographies and filmographies, and a biography and book list of John Galsworthy, author of the Forsyte novels.

Adapted from the novels and spanning the decades from the late Victorian era through the 1920s, The Forsyte Saga chronicles the lives of two generations of the Forsyte family, in which passion, betrayal, jealousy, adultery, revenge, money, power, and ambition drive the characters, drama, and intrigue. It stars Lewis as Soames Forsyte, the repressed and ruthless scion of the wealthy family, tormented in his obsession for possessing Irene, the impoverished beauty played by Gina McKee (The Borgias). Costars include Rupert Graves (Sherlock), Ioan Gruffudd (Horatio Hornblower), Julian Ovenden (Foyle’s War), Corin Redgrave (Trial & Retribution), and Ben Miles (Coupling).

The lush settings, gorgeous costumes, and brilliant acting all combine to make The Forsyte Saga a favorite of critics and viewers alike. In a 2006 Masterpiece Theatre survey, the series was voted the second favorite (behind Upstairs, Downstairs) among nearly 30,000 respondents. And critics hailed it as being “Stunning any way you look at it” (Vanity Fair); “Dazzlingly acted and written” (The Boston Globe); “Beautifully composed and acted” (The Daily Telegraph); “An intelligent story…excellent performances” (The Times); “Stunning performances.” (The New York Times); “Great drama” (TV Guide); “Marvelous” (The Sunday Times).

In reviewing The Forsyte Saga Collection, I was reminded of how fabulous this series is. (And the extra twenty-something minutes that aren’t available on other Forsyte DVDs or streaming videos are excellent). In scene after scene, what was displayed on screen triggered something within: a desire to burst free from the suppression; feelings of pity, contempt, and compassion and a longing for kindred spirits to throw caution to the wind and just get together already.

The bonus materials, especially the “making of” featurette, were really nice additions. And the interviews with cast and crew members were eye-opening. For example, never in a million years would I have thought that CGI was used anywhere in the series, yet it was. (Everything looks so real!) And the photo gallery images were not what I thought they’d be. One was especially amusing, at least to me.

Grab a copy today and see for yourself. The Forsyte Saga Collection is available at Amazon.com and other select retailers, as well as from Acorn Media, the exclusive distributor of this DVD set.

* Review copy provided by Acorn Media. All opinions expressed in this article are the author’s own.