Downton Abbey: Season 3 Premieres In the U.S. In January 2013!
Woo hoo! The dates for Season 3 of Downton Abbey have been announced! The show premieres on PBS on January 6 and airs each Sunday through February 17. 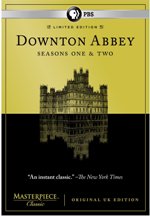 All is not well when Season 3 begins. The Great War may be over, but troubles at Downton are already brewing. Robert has serious financial issues; happily ever after may not be what’s in store for Mary and Matthew; and Violet may have met her match in Martha Levinson, Cora’s mother from America. Plus, Carson has a new footman on his hands (O’Brien’s nephew, no less). And what about the fate of Bates?

And speaking of Downton…

Congratulations to PBS’ Masterpiece for receiving 37 2012 Primetime Emmy® nominations, including 16 for Downton Abbey!

And congratulations to all of the nominees! The nominations were announced on Thursday, July 19, and leading the Masterpiece pack was Downton Abbey with 16 nominations, including one for Outstanding Drama Series. (The program won the Emmy for Outstanding Miniseries or Movie last year.) Other nominations in the Downton family include:

Over at BBC America, the Dramaville series, Luther, was nominated in the Outstanding Miniseries or Movie category, and its star, Idris Elba, got his second nod for Outstanding Lead Actor In A Miniseries Or A Movie.

And one of my favorite British actors, Damian Lewis (The Forsyte Saga), was nominated in the Outstanding Lead Actor In A Drama Series category for his role as an American Marine in Homeland.

On a Sad Note
My condolences, thoughts, and prayers go to the families and friends of the people who were killed at a movie theater in Aurora, Colorado on Friday. May those who passed rest in peace, and those who remain find peace.