There’s good news, bad news, and news we’re still waiting for in the realm of British TV. Here are a few tidbits. 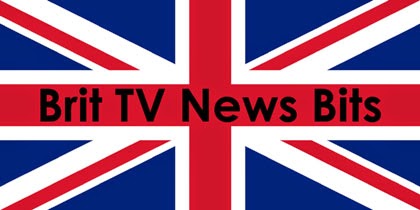 The British police procedural and legal drama is going on an indefinite hiatus that could turn into a permanent cancellation.

Even though the program has been a hit over its eight series, ITV Director of Drama Commissioning, Steve November, said, “There may well come a time when we re-visit Law & Order: UK. For the moment we’ll be resting the series whilst we continue to refresh our drama slate.”

On top of that, Bradley Walsh, who has starred as DS Ronnie Brooks since Law & Order: UK debuted in 2009, is leaving the show to pursue other projects in drama and entertainment. (He hosts the ratings- and award-winning UK game show, The Chase.)

“Ronnie Brooks is one of my best friends,” said Bradley. “It’s been an absolute pleasure to inhabit Ronnie’s Mac for as long as I have. Eight series is a wonderful achievement for everyone involved in the production. This has been one of the hardest decisions I have ever had to make. I hope one day to revisit him, but for now I’d like the opportunity to pursue other drama projects which ITV are developing.”

Viewers in the UK can catch the final episode of Series 8 (maybe the final episode ever) this Wednesday, 11 June 2014, at 9 PM GMT. BBC America, which has screened the first seven series as Seasons 1-4, has not announced whether it will screen Series 8/Season 5 in the US.

Unlike Law & Order: UK, Penny Dreadful will return for a second outing with ten episodes, up from the current eight. The horror/fantasy series co-produced by Showtime and Sky and starring Timothy Dalton, Eva Green, and Josh Hartnett has been a hit for Showtime, especially via the premium cable channel’s streaming and on-demand services.

Viewers have thus far been transported back to Victorian England and introduced to the likes of Dorian Gray, Professor Abraham Van Helsing, Dr. Victor Frankenstein, and not one but two of his creations. (Soon to be three?) Oh yes, and vampires, including a particularly gnarly one who’s more Nosferatu than Christopher Lee.

For those who haven’t seen it yet, the full first episode is available at the Showtime website (US only) and the Sky First Episodes channel on YouTube (UK only). Episode 5 — “Closer than Sisters” — screens in the US tonight, 8 June 2014, at 10 PM EDT on Showtime, and in the UK on Sky Atlantic this Tuesday, 10 June, at 9 PM GMT.

Filming for Season 2 of Penny Dreadful is scheduled to begin in Dublin later this year for screening in 2015.

If you’ve been missing the adventures of Mr. High-Functioning Sociopath himself, Netflix is now streaming all three series of Sherlock.

and “Sherlock Uncovered: The Villains“

And if you’re wondering when Series 4 of Sherlock will debut on this and the other side of the pond, the answer is: no one knows right now. Production hasn’t even begun yet, contrary to some reports.