I haven’t counted, but I’m guessing that right behind the number of holiday movies and television programs featuring Santa (a.k.a. Father Christmas) is the one for filmed adaptations of the classic A Christmas Carol by Charles Dickens. 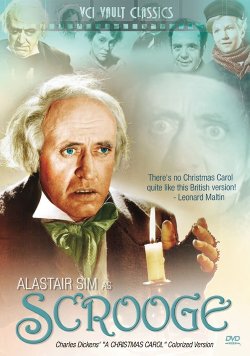 Today marks the 170th anniversary of the first printing of A Christmas Carol,

which has been in print ever since. (If you have only watched the story and not read it, I urge you to grab a copy of the book and let your imagination run wild.)

As for filmed adaptations, they go as far back as 1901, and everyone has their favorite version, including critics.

In 2008, A.O. Scott of The New York Times made a video detailing why the 1951 British film starring Alistair Sim is the best of the lot. (Note that the film was originally released as Scrooge

in the UK and re-titled A Christmas Carol

The following year, author Louis Bayard wrote a fine piece entitled “The best ‘Christmas Carol’ ever” for Salon, in which he describes what makes the 1984 made-for-TV movie

While I agree with both about the two versions, I am squarely in the latter’s camp. I still recall watching the premiere of the George C. Scott one on telly and thinking, “Wow. THAT was GREAT!”

Scott and the supporting cast were superb, for reasons besides the obvious, at least for me. Understand that, at that time, I had a raving crush on Roger Rees. After I saw his courageous portrayal of Nicholas in the Royal Shakespeare Company’s filmed production of Nicholas Nickleby on PBS, I became wholly enamored. While the character of Ebenezer’s nephew Fred isn’t nearly as deep, Rees played him with a depth I hadn’t (and haven’t since) seen in the Sim or other versions.

Crushes aside, it was also refreshing to see David Warner as the sympathetic Bob Cratchit, after remembering him as quite the baddie in The Holocaust miniseries of a few years earlier. And then as today, the hearty laugh and dripping sarcasm of Edward Woodward as the Ghost of Christmas Present makes his the best one ever. Oh, one last thing: the pointy, skeletal finger thingy and spine-tingly beyond-the-grave sounds of the Ghost of Christmas Yet to Come — way scary.

Now, some might argue that the Patrick Steward version

is the best, or that Scrooge,

the musical version starring Albert Finney, is tops. Much as I adore both actors, I haven’t seen the entirety of the former, so I can’t speak to it, and although the latter is a favorite of mine, it isn’t a contender for the be-all-end-all in my book.

Nope. That would be the book itself.