PBS is pulling out the stops in celebrating the 40th Anniversary Season of Great Performances with its premiere of the BBC’s magnificent The Hollow Crown. 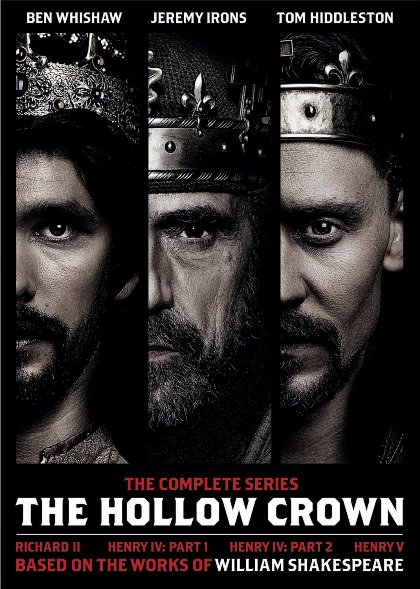 Filled with a star-studded cast and brilliant acting bar none, The Hollow Crown

is a four-part series of made-for-television movie adaptations of Shakespeare’s second history tetralogy. Known as the Henriad, it includes the plays Richard II, Henry IV Part I, Henry IV Part II and Henry V, each of which is full of power struggles, plotting, treachery, betrayal, and murder.

The Duke of Gloucester has been murdered. His nephew, the king’s cousin Henry Bolingbroke, goes to King Richard and accuses the nobleman Thomas Mowbray of this and other crimes. Mowbray insists on his innocence and clearing his name, and a duel is set. Richard calls it off at the last moment and banishes both men from England.

The divine king is no angel and confiscates the wealth that rightfully belongs to Bolingbroke after Bolingbroke’s father, John of Gaunt, dies, in order to help fund his battle against rebels in Ireland. In his absence, the governing of England resides with the Duke of York, uncle to both Bolingbroke and the king, which is especially awkward when he must choose sides upon Bolingbroke’s return to claim his inheritance and seize the throne. Bolingbroke gets both and is crowned King Henry IV after Richard concedes, is taken prisoner, and murdered.

Nominated for a 2013 BAFTA TV Award in the Single Drama category, Richard II stars Ben Whishaw (The Hour) as King Richard II, the role for which he won the BAFTA TV Leading Actor Award. Amongst the Richard II cast are:

King Henry IV is beset by problems: His crusade to the Holy Land (to cleanse his guilt over his complicity in Richard II’s murder) is put off due to the capture of army commander Edmund Mortimer by Welsh rebel Owen Glendower. Henry’s allies — the Earls of Worcester and Northumberland, and “Hotspur” Percy — are enraged that the King won’t ransom Mortimer, so they refuse to release prisoners to the King, and plot a rebellion against him.

And Henry’s son and heir to the throne, “Hal,” the Prince of Wales, whom Henry wished were more like Hotspur, has more rogue than reign about him as he frolics with knight-in-tarnished-armor Sir John Falstaff and other lowlifes. But Hal proves his mettle at the Battle of Shrewsbury when he kills Hotspur and saves the King’s life, an act for which Falstaff takes undue credit. Henry and Hal win this battle, but rebellion continues.

Jeremy Irons (The Borgias) stars as King Henry IV, Tom Hiddleston (Wallander) as Prince Hal, and Simon Russell Beale (MI-5) as Falstaff, the role for which he won the 2013 BAFTA TV Supporting Actor Award for. Also in the cast are:

King Henry appoints his son, Prince John of Lancaster, and the Earl of Westmoreland to lead his army against the rebels, who are led by the lords Bardolf, Mowbray, and Hastings, the Archbishop of York, and for a time, Northumberland.

Meanwhile, at Mistress Quickly’s, the Lord Chief Justice is rebuking Falstaff in an attempt to separate the rapscallion from Hal. They depart when called to battle, and Falstaff is tasked with recruiting soldiers. Thanks to Prince John’s cunning, though, the fighting ends before it begins, and the leaders of the conspiracy are captured and executed.

The King, gravely ill, is finally reconciled with and entrusts the throne to Hal. Upon Henry IV’s death, Hal is crowned King Henry V. Falstaff, knowing opportunity when he sees it, races to see Hal and reap his rewards. Instead, he is shocked and dismayed when the new king, now former friend, bars Falstaff and his band of misfits from approaching him, and has Falstaff arrested for his crimes.

The wiser and more serious King Henry V is advised by the Archbishop of Canterbury and Bishop of Ely to take the French throne. The French Dauphin (prince) is spoiling for a fight, and instigates one by mocking Henry. Before he goes into the fray once more, Henry discovers that the French have paid the Earl of Cambridge, Lord Scroop, and Sir Thomas Grey to assassinate him. Not one to suffer betrayal lightly, Henry has them executed.

French King Charles VI doesn’t want a war, but the Dauphin rebuffs Henry’s ambassador, the Duke of Exeter, and his demands, so war it is. The English army captures the French city of Harfleur, but at a great loss, yet threats from the French have Henry vowing to fight to the finish.

On the eve of the Battle of Agincourt, Henry walks amongst his troops disguised as a common soldier to learn their opinions of him and their willingness to continue fighting, as they are outnumbered five-to-one by the French. On the day of battle, the English prevail. The terms of the peace agreement, known as the Treaty of Troyes, include Henry marrying Princess Katherine of France and being named heir to the French throne. England and France are thus united in peace.