Doc Martin fans, your wait for new episodes is almost over. 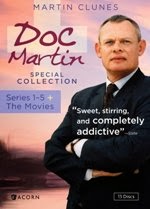 in the UK and U.S, but no matter, because viewers on both sides of the pond will soon have a new series of the dramedy to enjoy.

In the coming months, we’ll be able to catch up with Dr. Martin Ellingham (Martin Clunes), the GP with a phobia of blood and a bruque bedside manner, his amour, the local school headmistress Louisa Glasson (Caroline Catz), and the rest of the quirky residents of Portwenn.

When we last saw them,

Martin and Louisa had been split up, but were forced to come together when they discovered that the local pharmacist, Miss Tishell (Selina Cadell), had kidnapped their baby, James.

(In a move that only she of unrequited affection for the Doc could make, Miss Tishell had downed a cocktail of pharmaceuticals, went off her rocker, and in her meds-fueled delusion believed that she and the Doc were James’ parents.)

Reunited with their son and each other, Martin and Louisa professed their love to each other. And he proposed to her for the second time.

As the new series begins, Portwenn is buzzing with arrangements for their wedding. The question is: Will Martin and Louisa actually tie the knot this time?

Along with its “coming soon” announcement, ITV released this preview video of Doc Martin: Series 6.

(Sorry, ITV has deleted the video.)

ITV has not yet announced the UK premiere date for Doc Martin, nor has Doc Martin: Series 6

premieres on ITV on Monday, 2 September at 9PM local time in the UK. Acorn TV, which will debut the upcoming series’ eight episodes in the U.S. exclusively on the streaming service soon after they air in Great Britain. Stay tuned for updates.