Let me start by saying “Congratulations!” to all of the Emmy Award winners, including Dame Maggie Smith. It’s too bad she wasn’t at the ceremony to receive her second Downton Abbey Emmy; with so many Brit actors and programs having been nominated, it would have been fab to see at least one take to the stage for an acceptance speech. Although to be fair, Damian Lewis did for Homeland, an American program. 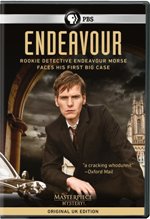 ITV has announced that, due to the overwhelming positive response to its one-off Inspector Morse prequel, production has begun on a full series Endeavour. The four two-hour episodes are written by Russell Lewis, a writer for the Inspector Morse series and the creator of Inspector Lewis.

Masterpiece is a co-producer of the new series, so we’ll be able to see it in the U.S. concurrent with or relatively soon after the premiere in the UK. No word yet on air dates, so stay tuned.

On the streaming video front, Series 2 of Sherlock has finally arrived on Netflix. And Acorn TV has just added the episodes from Set 3 of Trial & Retribution and Series 2 of the original Upstairs, Downstairs to its streaming lineup; both are available through November 4.

Have a great week!